Why Did You Bring Boys' Toys?

The GEMS (Girls Excelling in Math and Science) members ate their snacks as I unloaded my supplies with the help of the local newspaper reporter and photographer. As I placed the box of new Hot Wheels tracks on the student desk, one sharp-eyed girl called out, “Why did you bring Hot Wheels? Those are boys’ toys?” My first thought was “Oh no, and in front of the reporter!”

But both Bertha and Ewy saved the day.

We started with a short discussion of cars and their experiences — had they driven fast, and did they like it? Had they been in an accident and how did they feel? And had they ever considered working with cars as a possible career? Most girls loved speed, as do I, and had family members who had been in accidents. And two girls had worked on cars with their dads, and really enjoyed it.

We then watched the movie of Bertha Benz test-driving and fixing the first car and the girls were captivated. We briefly talked about the surprise of the people in the countryside watching her drive by, and then we showed Ewy’s movie. That did it. The room was silent, with all girls watching closely to see what happened, and as they showed her beautiful wrinkled face and heard her say “They said I could never finish. So I finished first,” there was a quiet sigh of happiness.

As I explained that they were each going to get a model of Ewy’s car to experiment with and to keep, faces lit up and I heard a smattering of applause. We then got to work.

We discussed the challenges to explore and discussed where the best place would be to work. The girls proposed and agreed that the hallway was best “because the cars will go faster.” I gave each team of 2 or 3 (their choice) their challenges and data sheets and we adjourned to the hallway. 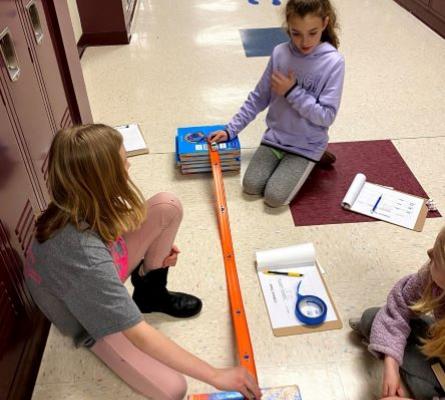 We all worked and took data for over 45 minutes, with each team testing and revising and screaming out with joy when they beat a previous distance or had a particularly spectacular collision. The very experienced reporter from the local paper said, “I had so much fun, I forgot to interview the girls!”

After gathering back in the classroom, each team shared its choice of challenge and talked about what they changed or revised to meet the challenge. We then used our reflection cards to talk about our successes. As we gathered to leave, many girls indicated that they had found this to be really fun, and that they could work with cars. They left with Ewy’s motto on the classroom door to come back to in the morning. 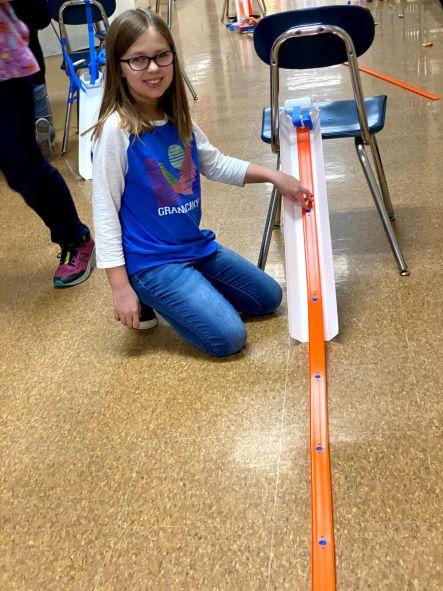 As the GEMS club leaders and I reflected on this meeting, we all agreed that, as usual, there was not enough time. We would have liked to explore the physics behind the use of weights on the cars to make them go faster, and to explore exactly what was happening in the head-on collisions one team was creating. (Newton’s Laws!) We have great slow-motion video to refer back to. We all agreed that cars and physics and automotive engineering will be in the GEMS curriculum again in the near future.

Laura Reasoner Jones, a retired technology specialist, started GEMS in 1994 to encourage her 10 year-old daughter and her friends to explore harder math and science courses. The organization is now international in scope and has over 160 current clubs.