Physicist, Philosopher, Mathematician, Mother: Who Was Emilie du Châtelet and Why Does She Matter?

Let us reflect a bit why, at no time in the course of so many centuries, a good tragedy, a good poem, a respected tale, a beautiful painting, a good book of physics has ever come from the hand of a woman.”

— Emilie du Châtelet, Preface to her 1735 translation of Mandeville’s “Fable of the Bees”

I have been thinking a lot lately about legacies: my mother, Dorothy Silverstein Stevens, an award-winning artist from the age of 14, recently passed away at age 100. She lived a long and impactful life and left behind a large body of paintings, drawings, designs and sculptures. During WWII, she worked as an artist for the Manhattan Project in Chicago, designing safety posters. A young woman fresh out of college with a degree in art history, in 1942, she said, she had no idea what the scientists there were working on, only that communicating occupational safety was part of her job; her designs were intended to inspire that.

A century is no short time to be in the world. My mother saw massive changes in society and culture and remained engaged until the end, turning to memoir writing when arthritis kept her from creating on canvas or in clay. Her painting and sculpture and her philosophy on art evolved over time, as did her understanding of the war effort and her small part in it.

It has become my job to preserve Mom’s legacy and find the best ways to pass on the beauty, philosophy, and writings she left behind.

But earlier, I had started on a quest to help restore another woman’s legacy — one that had been hidden for close to 300 years. The Marquise Emilie du Châtelet, physicist, philosopher, mathematician and mother, is entombed in a beautiful baroque church in Lunéville, in eastern France. On that black tomb at the entrance into the sanctuary, there is nothing. Not a description. Not a date. Not a name.

Every day, people march over the grave without knowing who is entombed there, or why she was important.

As a writer of time travel novels for teens, I am intrigued by those who leave their mark and help shape the future. Edge of Yesterday’s time-traveling, STEM-smart girl protagonist, Charley, in her determination to become a modern-day Renaissance girl, seeks to meet all her “superheroes of history.” Leonardo da Vinci, being the first, is easy to understand; everyone knows of Leonardo as the ultimate Renaissance genius. But there are many others — women, people of color, non-Westerners — whose names have been edited out of history. 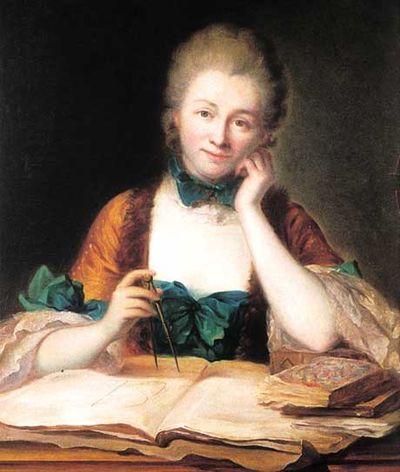 Emilie du Châtelet is one of them. In David Bodanis’s 2000 biography on Einstein, E=mc2, and accompanying PBS television special on the genius of that simple equation where I first heard of her, Bodanis points to Emilie du Châtelet as, “a woman trapped in the wrong century, trying to carve out a space where she wouldn’t be mocked for using her mind

What was the groundbreaking work that Emilie contributed leading to the formula for relativity? And what else was there to know about this woman “out of time?” Charley being Charley, she had to know.

And naturally, as an author and science writer, I had to discover this Emilie for myself, a journey which led me to explore France, to French society under King Louis XV, to history and its writers, and to reasserting this remarkable woman’s legacy to, and for, the world.

Interesting that the French word for legacy is patrimoine, or patrimony. Coming from the Latin word pater (father), and meaning something inherited from one’s father. As if men are the only one’s worthy of a legacy. Or possessing the brains, bounty and bravery to leave a mark on the world.

I knew from my previous research that Emilie had all of the above. The 18th century, known as the Enlightenment, saw an explosion of knowledge, philosophical discussion and arising principles of individual freedom. It was the time in which the Scientific Revolution was taking the Western world by storm.

And the Marquise put herself smackdab in the middle of it all. Her father had tended to her education — something young women of her day were not commonly afforded. She studied Latin, English, Italian, and Greek, translated the Aeneid, read Homer, Horace, and Cicero, and excelled at math. She gambled at the Court of Versailles and won — by counting cards and calculating probabilities.  A scientist who burned with a passion for discovering the secrets of energy, the great French literary satirist and playwright Voltaire described Emilie admiringly as, “That lady whom I look upon as a great man… She understands Newton, she despises superstition and in short she makes me happy.”

In fact, Emilie translated Newton into French in an edition still in use today. She was recognized by the French Academy of Sciences for her treatise on the nature of fire (anonymously, and competing against Voltaire’s own, differing theory). She authored an original text on natural philosophy, the Institutions de Physique (Foundations of Physics). She took issue with Newton in his understanding that the Universe worked like a mechanical clock only maintaining balance in the orbits of stars and planets with Divine intervention, arguing instead that once conceived, the Universe needed no intervention and her scientific proof for what she called "force vive," or living force, laid the mathematical foundations for Relativity two centuries before Einstein.

But du Châtelet’s masterwork, which she worked on to the end of her ill-fated pregnancy with her fourth child, was her commentary on Newton, Mathematical Principles of Natural Science, that would explain his then-new laws of gravity for the French public.

I arrived in France for the express purpose of stalking Emilie du Chatelet and finding her legacy. Every year for the past 10 years, on the anniversary of her death, September 10th, 1749, an intrepid band of fans and followers led by the intrepid and passionate Annie Jourdain has gathered in Lunéville, where the marquise is buried inside the beautiful Baroque St. Jacques church. They come for the express purposes of restoring her life and legacy.

The scene is surreal. Passing beneath the church’s magnificent gold, ebony and marble choir loft, treading across centuries’ old gray marble and into the brightly lit sanctuary, we encountered a somber black stone marking the tomb of an unknown. It is a stark encounter. Her brilliance hidden in plain sight.

Even here, Emilie is best remembered, if at all, as Voltaire’s lover. In a life cut short, her legacy was lost. Because she was a woman — one who died bearing a child not her husband’s — society, history and even the church where she is buried didn’t accord her the honor she deserved.

But for those of us who marched to honor her that day, Emilie — and her legacy — is very much alive in the 21st century. For her literary, scientific and mathematical opus outlives her — much as her paintings, sculptures and writings outlive my mother.

As one who is intent on making history, science, art, math, and literature relevant for young people in the fourth book in the Edge of Yesterday series, “Find Me in the Time Before,” I take joy in unveiling the Marquise through Charley’s adventures. For history is alive—and those who record, edit and interpret it have the power to unveil truths, heretofore hidden, to inspire future generations.

Charley Morton, time traveler and budding Renaissance girl, not only interviews Emilie up-close-and-personal, but engages with the “woman trapped in the wrong century,” even as Charley chafes against being trapped in her own. “Let us reflect a bit,” Emilie writes. How will this interaction change Charley’s trajectory in life? Or Emilie’s? How will it change you?

Robin Stevens Payes is a Maryland-based author, science writer and storyteller who takes teen readers to the Edge of Yesterday through her time travel novels and interactive “learning through story” adventure portal.