Without these skilled ladies and many others, we wouldn’t have the technology we have today. Yet, the National Center of Women & Information Technology (NCWIT) reports that the number of women in computing occupations has declined since its 36% peak in 1991.

This has started a public discussion on closing the gender gap in technology.

Why not start with the young minds already interested in STEM topics?

However, girls seem to disconnect with STEM topics as teenagers.

In fact, Girls Who Code reported that although 74% of middle school girls express interest in STEM topics and careers, only 0.4% of high school girls choose pursue them in college. 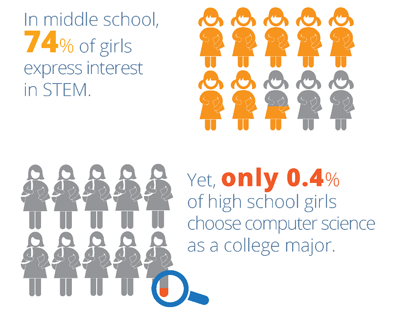 There are numerous reasons for this disconnect. Below are three of the most prominent:

1.  Inherent Bias: As household computers hit the market, they were marketed toward young boys as toys.

"Boys tinkering with computers" quickly became the narrative for “techie culture.” This made it tough for girls to pursue interests in technology.

Fast forward to an age where computers are a standard tool and source of entertainment for men and women alike, and the “computers are for boys” mentality can still be seen throughout media.

The White House’s Office of Science and Technology’s fact sheet on STEM Depiction Opportunities states “when it comes to portrayals of computer scientists and engineers, men outpace women 14.25 to 1 in family films and 5.4 to 1 in primetime [television].” This is on top of highly intelligent female characters causing a sense of bewilderment in plotlines from of their perceived rarity.

These biases imposed on young girls can cause them to eventually turn away from STEM-related careers.

Not having an early introduction to computing skills, or not seeing how math and science can apply to technology careers, can affect girls' interest in STEM related topics.

3.  Low Confidence: After a one-year study of its computer science program, Harvard found that women with eight years of programming experience are as confident as their male counterparts with zero to one year of experience. 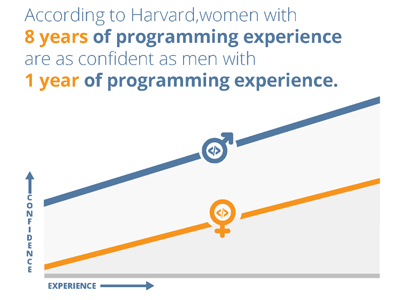 People who lack confidence in their skills and future successes tend to limit themselves. Internalized stereotypes can cause girls to feel like they don’t have the “right” skills to succeed in the field, which can deter them from studying STEM topics.

Inspiring Girls About STEM
Just like there isn't a single cause for the tech gender gap, there are multiple ways to boost girls' interest in STEM. Encouraging girls who are already interested in STEM to keep studying the subjects is a good place to start. Here are three ways to do this:

This can be used as a tool to counteract inherent biases and the belief that STEM related careers are “too hard,” “too boring” and only for a “certain type of person.”

The White House’s STEM Depiction Opportunities reported on the “CSI Effect,” saying how the increase of crime-scene investigation shows affected the number of forensic science applications at universities.

So having more Pennys (Inspector Gadget), Gwen Stacys (The Amazing Spiderman) and female Ghostbusters can give girls role models. Plus, the characters' plotlines can highlight the effect STEM careers have on society while debunking misconceptions of the field.

2.  STEAM Efforts: Many successful women in data science and technology believe early exposure to STEM and computing can help inspire girls to study these subjects.

Many organizations have created boot camps, internships, and workshops to teach girls coding and programming. However, these programs may not be an option for some families.

A newer concept of blending STEM topics with the arts has taken off in organizations and schools around the country, changing the acronym from STEM to STEAM. Through narratives and art-based projects, STEAM efforts work to engage both sides of the brain while making scientific concepts easier for children to understand.

3.  Mentoring: Many times, girls avoid studying science and technology because they feel isolated as the minority in a group or program. This is an issue not only for girls, but for women in the field.

In a roundtable discussion, data scientist Lilian Pierson said “Women need to understand what opportunities are available to them, what those opportunities involve, and what the quality of life looks like for someone in this role.”

Having a real-life mentor gives girls the support needed to further their interests in STEM topics, while reinforcing the fact that skill proficiency is based on curiosity, will, and persistence -- not gender.

Takeaways
Closing the tech gender gap won't happen overnight. However, encouraging girls to study STEM topics could increase the number of young ladies taking on the challenge to succeed in a male-dominated career field.

For more information on the tech gender gap and benefits of gender diversity, read Why We Need Women in Data Science.

Elizabeth Mazenko is an editor with BetterBuys.com. BetterBuys works to help organizations make smart enterprise software purchasing decisions. Their team of experts provide reviews, resource guides, and insights on the latest news and trends. They encourage the idea that skill proficiency is based on the curiosity and determination of the individual, and want to inspire change through providing facts over opinions.