This year marked the second Introduce a Girl to Engineering program held at the Montrose Regional Library during Engineering Week. Our theme was all about cars and I cannot really say that I chose the theme so much as it chose me. I begin planning for a project of this magnitude months in advance. I knew I wanted to have the engineering program again as it was such a huge success last year, but I did not know what my theme would be until I saw the invitation from the National Girls Collaborative Project for the No Limits grant. Once I saw that, the plan started to come together.

I love to use local collaborations to highlight our community’s wealth of knowledge and personality, so I started with the Black Canyon Classics Car Club to see if anyone knew of a female driver, mechanic, or car engineer. Through the car club, I found a young woman, Mianna Wick, who has been racing Indy Cars for several years and she was the highlight of our program. She was engaging and funny and really connected with the kids. She had interactive segments with her talk, such as when she demonstrated what a G-force would feel like by having six girls lay one at a time on top of each other and that the weight of each successive body on the next was like adding one more G. Mianna went on to discuss how young she was when she started racing, what her dreams have evolved into, and the perseverance that it takes to achieve the level of racing skill she has attained. After her talk, she took pictures with several of the children who continued to pepper her with questions. While the program was continuing inside, folks were trickling in and had the opportunity to visit with the car club which had brought several of their vintage cars to park at the entrance to the library. The participants had fun exploring and taking pictures with the cars and their owners. 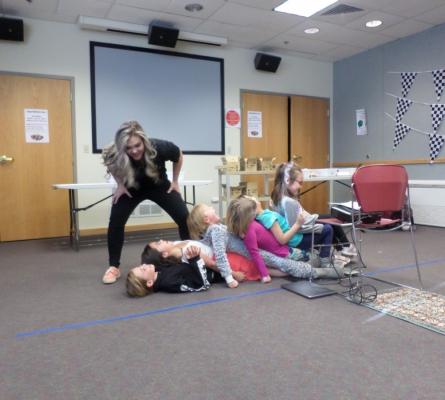 After our guest speaker finished, I introduced the National Girls Collaborative Project and the No Limits grant. I discussed gender bias with the adults and the need to use neutral words and phrases when we engage and talk with our children so that we do not perpetuate certain gender stereotypes, such as girls are crafty and creative but boys can be mechanically minded. After introducing the No Limits grant, I showed the Ewy Rosqvist video, An Unexpected Champion, and presented each child with the Mattel Mercedes Benz car. Both brought about several comments from the young girls and many said they already have their own toy cars that they play with.

Montrose is a rural community and when we have programs hosted by the youth services department, we usually have families with children in a wide range of ages attend so I knew that I wanted to have something for everyone to engage with. I designed the program to have multiple skill and ability levels. I chose to use a stoplight system to display the skills needed for each station so that parents could assist their child in finding the activities that would be the most beneficial and fun for them without frustration.

The green light station was for everyone, toddlers to teens, and it consisted of painting with cars that had fun knobby wheels to make beautiful pictures. In addition, each child received a toy wooden car to color and decorate with stickers. Another zone in the green light area were ramps with different surfaces to discuss what friction was and how each surface changed the speed of their car. 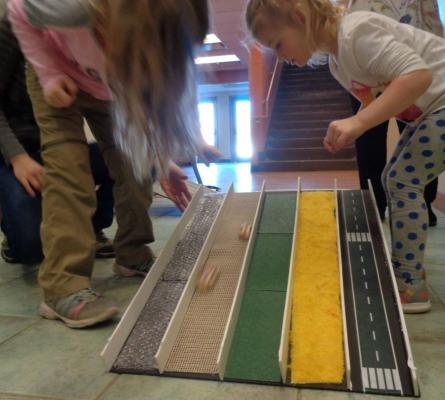 For mid-level skills, we had the yellow stoplight which consisted of a magnetic car and track craft. Participants designed and colored a road or racetrack scene on a paper plate, colored and cut out a small paper car, then added a small magnet to the car and one to a popsicle stick. Once all the components were ready the car was placed on top of the scene and the stick magnet was positioned underneath to move the car along the road.

The red stoplight zone was the Lego balloon car design and race area. The kids’ goal was to make a Lego car with less than 30 pieces and with only one balloon to power it. Once assembled they had races to see who’s would work and how far they would go. If there were problems, we had the racers go back to the drawing board, help each other out, and try to figure out what could enhance their work. With this project we also discussed the potential energy and kinetic energy of the balloon to power their cars. Interesting note — several of the girls worked for more than 45 minutes to get their car to work just right and travel a decent distance. They were so proud of themselves! 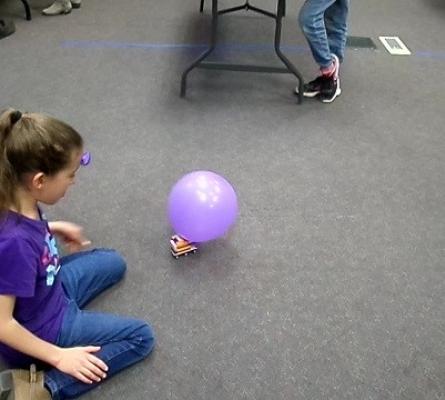 As part of this program, I also wanted to use as many of the activities as was possible in our outreach programming on our bookmobile. A week later we took the wooden car craft, the Mattel Mercedes Benz toy cars, and the ramps to a small local neighborhood that is mostly Hispanic. Many girls visited the bookmobile after school, and they had such a great time coloring and decorating their wooden cars and then testing both types of cars on the different ramp surfaces.

Our second annual Introduce a Girl to Engineering program was a success and I hope to make this a yearly program because the message of inspiring and empowering girls is so important. What will next year’s theme be? I have no idea, but I cannot wait to find out!

Tina Meiners is the head of the Youth Services Department at the Montrose Regional Library in Montrose, Colorado. She conducts a monthly STEM program for kids 4-8 and 9-12 called STREAM (Science, Technology, Reading, Engineering, Art, and Math) with a different art or science topic each month. She is also a recipient of the NASA@MyLibrary grant going into its fourth year.