From Astronauts to Zoologists: Girls Can Be Anything

During nine workshops at four locations over the course of two months, the majority of students held up pink papers for princess dolls and stuffed unicorns and blue papers for action figures and dinosaurs. Soccer balls and toy race cars produced a swirl of blue and pink. When I asked, “Can girls be race car drivers?” I received mixed responses. “What about football players?” Many students answered no. “Is there any job that a girl can’t do?” 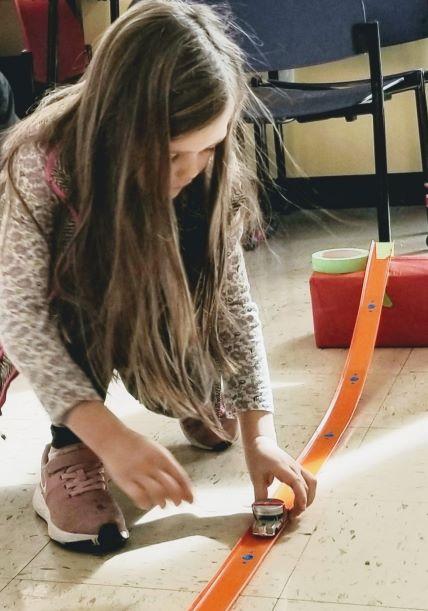 While nearly all students said aloud that girls can do any job, many of the comments revealed that students held  unconscious gender stereotypes. For example, a girl who had answered that “girls can do anything they set their minds to” also said that “some girls like to play with boy toys.” Another girl remarked that, even though girls “technically” could drive race cars, “most girls wouldn’t want to drive race cars because racing is dangerous, and girls don’t like to do dangerous things.”

Such gender stereotypes are the reason that Mercedes-Benz USA and Mattel teamed up with the National Girls Collaborative Project to show children, particularly young girls, that they can be and do anything they desire. There are no limits. This year, thousands of girls across the United States received their own die-cast Matchbox replica of the Mercedes-Benz 220SE that Ewy Rosqvist drove during her historic performance in the Argentinian Grand Prix on November 4, 1962. Ewy Rosqvist finished three hours ahead of the competition, setting a speed record of 78 mph on the dangerous road course, proving that women could drive and win the Grand Prix.

In each of my workshops, I showed students a short film provided by the grant sponsors about Ewy Rosqvist. While watching the film, students reacted with exclamations, sighs, and applause. Many students remembered very specific information afterwards, such as Ewy’s exact speed, the conditions of the course, the fact that some competitors died during the race, and the number of hours Ewy finished the race ahead of her competition. Students asked if Ewy was still alive and wanted to know more about her. When I asked how hearing Ewy’s story made the students feel, students responded:

With everyone psyched from learning about Ewy’s big win, I introduced the students to the two hands-on STEM stations in which they would be participating using their Ewy cars. Students were given the option of working in teams or alone, and I offered to help the students find a partner if they didn’t come with a friend. After explaining the challenge of each station, each student or team formed and recorded a hypothesis prior to attending each station. 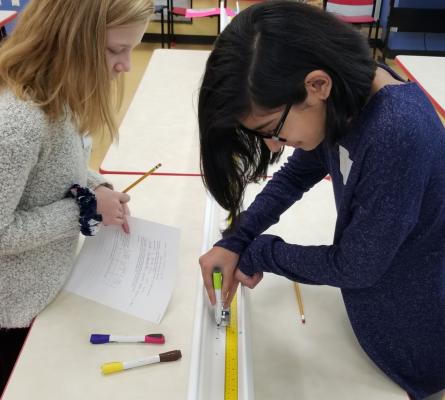 In the first station, we focused on accuracy of measurement. With the materials provided, students were able to measure and record distance to the centimeter, which meant they had fractions or decimals to work with during the data analysis stage. Students then computed and analyzed their recorded data to determine whether the wind had any impact on the distance the cars traveled and, if so, whether cars without the wind traveled a greater distance than cars with the wind. My assistants provided one-on-one help with the computations. Finally, students compared their findings to their hypotheses to see if they had been correct about the impact of wind on the distance traveled. It was fun to hear the students exclaim, “I was right!” but just as fun to hear them say, “I was completely wrong about that. I wonder why. Do you think it’s because . . .?”

In Station 2 students were challenged to determine whether weight would affect the distance a car travels on a sloped track. I built this station using Hot Wheels track, duct tape, and the empty boxes in which Ewy’s Matchbox cars came. “Reduce! Reuse! Recycle!”  Students released their Ewy cars three times down a ramp and recorded how far the cars traveled. Unlike in Station 1, the students were only provided with tools to measure each increment of distance (conveniently, the blue dots on the Hot Wheels track); that’s because the measuring focus of Station 2 was estimation — another useful STEM skill. Then, students attached six washers to the top of their Ewy cars with rubber bands, which is harder than you would think, and ran their cars down the ramp three additional times. Would the added weight affect the distance the cars traveled? After recording and analyzing their data, students compared their findings to their earlier predictions to see if they had been correct. These findings were a surprise to many students who had hypothesized that the added weight would make the cars travel farther. 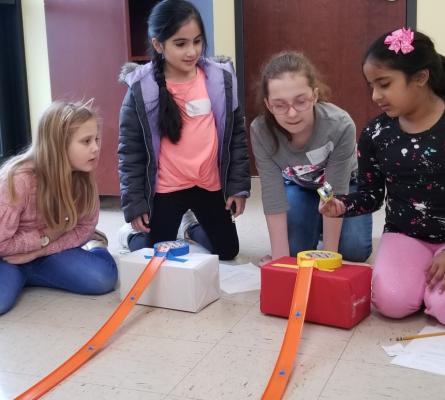 Students who finished both stations before the allotted time were permitted to conduct the same experiments again but, instead of measuring the distance traveled by the cars, they measured the cars’ speed using stopwatches. This is a great way to extend this activity for another day! Students also could investigate the STEM books selected by our local librarian.

After all students completed their stations, we came back together and discussed our observations, data, and results. I told the students that, without even knowing it, they had just worked through the scientific method — like many adults do at work every day in STEM fields! Students were eager to explain why they were correct and just as eager to figure out why they were incorrect in their initial predictions. We talked through the scientific explanations for their observations and conclusions. The students then were able to hear directly from women working in STEM fields, including chemical engineer Stephanie Riggs, Vice President of Bulk Gases at Airgas Southeast. I also talked to students about some women I admire such as Sally Ride, the first American woman in space, and my mother Sharon Hartsell, who instilled in me my love for science.

On the way out, I asked students to record their comments about the workshop on a poster board. Some of the  comments were:

And isn’t that we want — a future filled with inspired, bold, strong, stubborn women supporting one another and supported by men?

Thanks to the Girls Have No Limits grant, Williamson County 4-H exposed hundreds of young girls and boys to strong positive messages about girls’ abilities. We enabled the students to identify and challenge stereotypes that may negatively affect them and others. As these young students completed hands-on STEM activities with their limited-edition Matchbox cars, the focus never left Ewy Rosqvist’s inspirational performance. As Ewy herself said, “They said I could never finish, so I finished first.” And, as one of our young female attendees said at the end of the workshop, “I feel like I can do anything if I put my mind to it, like Ewy.”

Thank you to the National Girls Collaborative Project for helping me provide these experiences to the youth in our community! A special shout out goes to my youth assistants Levi Cullum, Srichi Dalai, Rinaz Jamal, Michele Vincent, Lauren Stockdale, Junaid Jamal, and Anshul Bera.

Jennifer Hartsell Stockdale, an attorney for the past 20 years, also serves as a youth educator for Williamson County 4-H. She teaches STEM classes for fourth through eighth grade students and crime scene investigation classes for high school students. She is passionate about developing tomorrow’s great thinkers, leaders, and citizens.